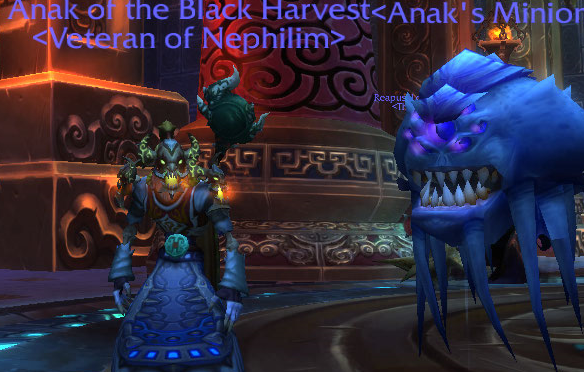 After many hours and failed attempts I finally completed the quest line for my warlocks Fel fire. Yes part of the reason was that it is Fel fire.  The main reason though was for the title.

Two weeks ago I had no intention of playing my warlock who was still level 85. A friend however completed the quest line and brought to my attention the fact that it now is not just a spell effect but a feat of strength and a title. This started me on the task of leveling my warlock which only took a couple days, farming for the tome that began the quest line, and grinding through the quest line.

The whole process was simple enough. The quest line was completely doable in my low level gear. The final segment of the quest however was a show stopper. It is plausibly doable in low level gear, but an issue I was having was the amount of time it took to kill the Fel hunters. I will be narrating my kill video soon as well as a walk through for the rest of the quest line leading up to it.

This fight was by far the hardest thing I have done in the game. It pushes you to not just DPS but to mitigate damage, change targets, and crowd control the adds. It sounds simple enough but the fight is very unforgiving so forgetting one thing, or delaying your timing will cause you to die and have to start over. The only thing I could compare this too would be Heroic raiding and the frustrations of people learning the fight. Never has there been a solo quest line that pushed so hard. I look forward to Blizzard utilizing the solo scenario instances more in the future for fights like this.

Even though I completed the quest I did die at the end of my fight. You can see me throw my hat in the web came cause I was so close. I then realized that my enslaved demon was still controllable and pushed out the extra damage to complete the quest. The quest ends with him killing your demon which I thought was me failing but was just part of the role play. Realization took a moment but I shouted in joy when I realized it was complete and I had one by controlling me demon from beyond the grave